What’s the book about?
If anyone ever said being an adult was easy, they hadn’t been one long enough. Diana Casillas can admit it: she doesn’t know what the hell she’s doing half the time. How she’s made it through the last two years of her life without killing anyone is nothing short of a miracle.

Being a grown-up wasn’t supposed to be so hard.

With a new house, two little boys she inherited the most painful possible way, a giant dog, a job she usually loves, more than enough family, and friends, she has almost everything she could ever ask for.

Except for a boyfriend.
Or a husband.
But who needs either one of those?

My Review
I think this may be my favourite book by Mariana Zapata. So far anyway.

Right from the beginning, I absolutely adored this story. Wait For It tells the story of a single aunt who suddenly (and devastatingly) loses her brother and ends up becoming the guardian for his two children, her nephews. Two years on and they’re making it work day-by-day. The heroine and her nephews make a fresh start in a new neighbourhood and there they meet the hero and a whole cast of crazy characters/neighbours.

The first thing I loved about this story is the family dynamics between the heroine and her nephews. Despite the traumatic events leading up to her guardianship, they still maintained open and warm interactions that you could immediately feel the love their shared as a family. They were their own little tight-knit crew that I immediately wanted to be a part of and watch out to anyone who tries to hurt any of them!

The second thing was the rest of the cast! There were so many lovable and bizarre characters yet they all had a place in the story. Each character had their own personality and history, and it all completely worked with the story adding another dimension to whatever was currently happening in the story.

As always Mariana Zapata’s writing was fantastic and addictive. It’s strange because I generally don’t enjoy slow burn all that much. I want my romance with a very obvious romantic aspect; not necessarily insta-love but a little faster than your typical slow burn. However, Zapata is one author that I just love and know she does slow burn so well. Her romance is subtle and sneaks up on you. She really develops the relationship between her heroes and heroines, and adds in small swoon-worthy moments of understated romance that leave you wanting more. Every time I read one of her books (especially Wait For It), I end up feeling warm, fuzzy and truly like I’ve fallen in love with the characters. Overall, amazing and everyone who wants a beautiful slow burn romance with a solidly built foundation should read this immediately! 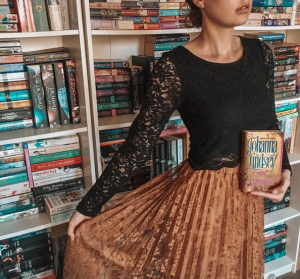